As I sit here, waiting for my morning black coffee to cool, I am thinking about the fact that I am exactly one week shy of turning 35 years old. I don’t really feel older…except on mornings when I can still feel the soreness in my legs and knees after a 15 mile training run the day before! I feel a bit wiser in my 30s than I did in my 20s. For starters, it was not until my 30s that I actually started liking coffee (which is sort of funny since all my life I was asked my opinion on coffee…it’s what happens when your last name is Coffey). Here’s a little flashback for your Friday:

So 35…not really a big milestone where ages are concerned, but nonetheless, I feel like I am at a crossroads and need to make a decision. Let me give you a little background…

Right before my 20th birthday, I set several goals for myself to achieve in my twenties, specifically a list I referred to as my “things to do before kids.” They were:

We cut the next two a little close…when I realized that we were expecting our first child and I still had two more things on my “list before kids” that I had not checked off, the man of my dreams (see #3) quickly got to work to help me cross off to more… 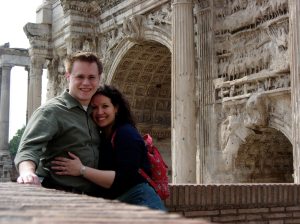 Our daughter, Veronica, was born on September 26, 2005. I set several goals, six to be exact, of things I wanted to accomplish before I had children. I wasn’t blogging at the time (Dan had Shadowbot, but I didn’t start Littlebots until 2005), but all my friends knew of my list, and most importantly, my husband was aware of the list. The next few years I referred to as the “incubation years,” as I either had a bun in the oven or was breastfeeding. It was a fun few years and fairly easy as things go. I told Dan that I was willing to have as many children as he wanted (to help with)…he was ready to stop after two! So our little family was complete.

I had my second child a month before I turned thirty years old, and I felt I was ready for phase two of goal setting. After several years of either being pregnant and/or breastfeeding, I was not so happy with the toll it had taken on my body and didn’t feel very healthy. So, that was my “goal” for my thirties…to be healthy.

For some reason, I was not more specific. That’s where I think I went wrong.

Don’t get me wrong, I am dedicated to living a healthier lifestyle. I joined a gym four years ago (and actually use it). I lost 5o lbs in the past four years. I quit drinking diet sodas (I was drinking 4-6 a day). I have run 4 half-marathons and one full marathon, as well as countless 5ks and 10ks; however, as I realize that next week I turn 35 and will be halfway through my 30’s, I’m asking myself, what do I really want to achieve in this decade. What exactly does “living healthy” mean to me? I wasn’t specific enough in my goal setting when I entered my thirties…maybe it was the lack of sleep from having a newborn and a two year old. I was too vague and thus it’s been harder to hold myself accountable for what I want to achieve.

I have 7 more days before my 35th birthday and I think between now and then I am going to evaluate my goals for second half of my 30s and be specific in my goal-setting for the next 5 years, but first, let me refill my cup of coffee!

Error: Twitter did not respond. Please wait a few minutes and refresh this page.

Once Upon a Run

Once Upon a Run

A mom just trying to keep it all together...

Inspiring, Encouraging, Healthy / Why waste the best stories of the World, pour a cup of your favorite beverage and let your worries drift away…

Through Heather's Looking Glass
Run, Karla, Run!
According To Kelly

Once Upon A Run

Finding Happiness in Each Day

a couple that runs together stays together.

Running through life and hoping to learn a few things along the way!

Running Down a Dream 23's Blog

Helping you achieve your fitness dreams one step at a time

There are so many parts to who I am, and I get distracted by all of them.

My Second Star to the Right

Thoughts, dreams, and plans of a wannabe princess.

Will Run for Ears

The excuse I used to go to Disney...and change my life!

My journey through life, one foot picture at a time.

Losing weight, one mile at a time

Random thoughts from an average guy trying to run . . .